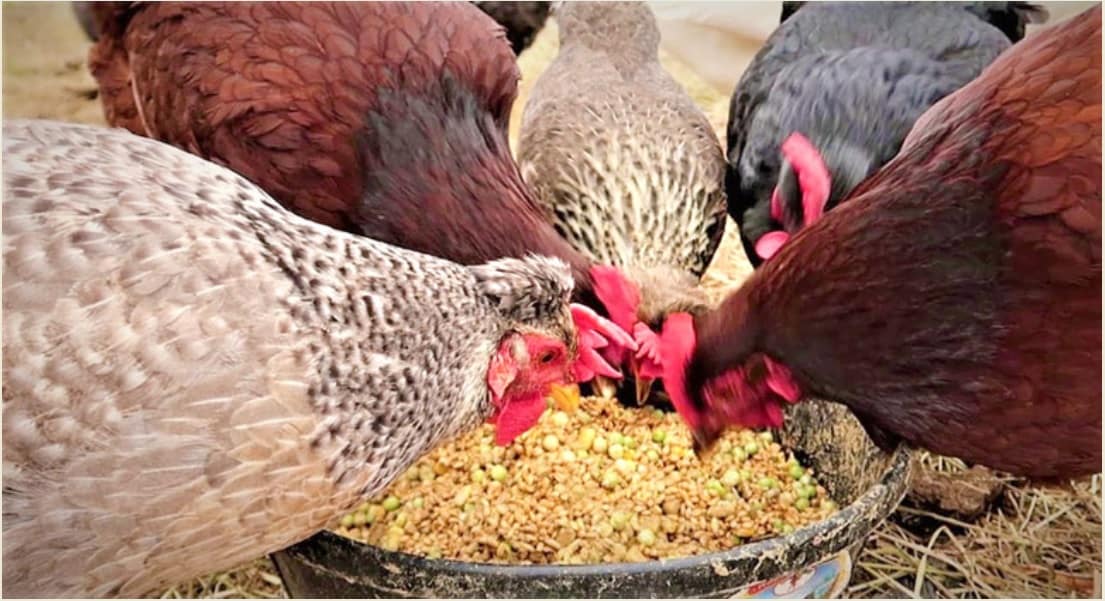 Poultry feed involves the food consumed by the farm poultry such as chickens, geese, ducks, and other domestic birds. Earlier these poultry animals lived on the leftover grains that they found on the ground, or fed by their owners. But, as the farmers got more aware about the essential proteins required to keep their poultry animals healthy which further benefit them with healthy eggs and chickens.

It has been discovered that there are certain nutrients which are required by almost all the birds. The poultry feed manufacturers much keep the following things in mind before producing the poultry feed for the animals:

1.     The feed must contain protein although the amount of the protein consumed by the poultry animals depends upon their age, size, and type.

2.     The common amino acids found in the poultry feed includes lysine and methionine.

3.     Vitamin A, E, D3, and B12 along with minerals like phosphorus, and copper sulphate contribute as one of the major requirements in the poultry feed.

4.     For digestion, enzymes are important while products with the fiber in the form of grain.

5.     For the hens to lay healthier and more eggs, they need to consume additives like Omega 3.

The poultry feed manufacturers are required to mention the amount of nutrients involved in making the poultry feed. This enables the poultry owners to buy sufficient amounts of feed for the better health of their poultry animals.

Let’s discuss the common terms which are frequently used in the chicken feed labels:

1.     Pellets: To decrease the waste, chicken feed is converted into pelletized form so that it can be used easily.

2.     Crumbles: The chick size pieces formed by the pellets.

3.     Mash:  It is unprocessed feed containing powder like particles and is fed dry, or wet to the chickens.

4.     Fermented: Type of feed which is mixed with water for its fermentation process.

5.     Medicated: The feed which is treated with coccidiostat to help chickens to protect them from any attack by the coccidian protozoa.

In the case of meat birds, the poultry feed manufacturers are required to produce the high-protein feed for the rapid growth of the birds.

The lack of protein can hinder not only the growth of such birds but also lead to their certain health issues.

Consider the case of a broiler chicken whose lifespan is around 5 weeks before they are slaughtered. During this period they require high protein, approximately 22%-24%. Several feed manufacturers make a feed that contains 22% protein, especially produced for the broilers.

As the name suggests, all flock feed works for most of the poultry birds including: chickens, turkeys, and ducks.

Such type of feed contains around 16% protein along with essential vitamins and minerals. But such feed is not sufficient for birds under the age of 7 weeks.

Such feed is usually used to maintain essential feed for the poultry birds.

Many farmers feed their flocks with the fermented feed which is healthier for the birds.

If a farmer has a small flock, then he can easily use fermented feed for his poultry birds.

To make the fermented feed, one needs to soak the feed and grains which releases the locked nutrients that can be directly consumed by the birds nourishing their body.

These two types of feed play a major role in the growth of the chicks.

When the chick is hatched, it should be fed with the starter feed as it contains 20%-24% protein value and until the chicks are 6 weeks old; this feed is required for them. After 6 weeks of their birth, the starter pack can be switched to the grower feed which contains comparatively less protein, around 18% protein value.

This switch from the starter to grower is important because after a certain growing age, higher protein can lead to kidney damage in the chicks. Such precautions are important to keep in mind before feeding your poultry animals.

Who doesn’t like to taste the different flavours in their meals? Similar is the case with the hens. They expect to be treated with something different from their usual feed. But then, you must keep certain things in mind before treating your hens with snacks. The snacks might include different berries like blueberries, blackberries, scratch, worms, and so on. But such snacks should be given in moderation.

Taking care of the poultry feed is not rocket science but at the same time it is a bit complicated to manage maintaining the nutrients proportion in various poultry feed for the animals.

So if you are someone who thinks about the health of their animals and want them to get all the nutrition essential for their body, then Prodigy Foods can offer you varieties of feed for your livestock enough to keep them grow healthy and increase their immunity to fight harmful viruses and diseases at a very reasonable price.